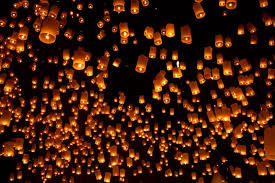 If you are a travel lover and follower of great cultures and heritage, the above images are not unknown to you. Perhaps, some of you have already experienced this orgasmic event or have decided to experience it soon. As all amateur travelers do, I have also created a wishlist of all the festivals I wish to see and this one’s definitely high on the list. I have been to Thailand (Bangkok and Pattaya), however missed visiting the place, this festival is held in- Chiang Mai.

Fortunately, the gods love me enough and decided to show some mercy on me. They decided to bestow on  me this spectacular show of sky lanterns, closer to home. Apparently during my last trip to Goa, which was in February, the people of Goa decided to celebrate the festival of Loy Krathong and Yi Peng- a pair of holidays which mark the letting go of things by releasing a ‘krathong” – a floating banana leaf full of flowers and a candle – into a body of water, or a ‘khom loi’ – a giant floating paper lantern into the sky.

The gesture indicates carrying away of bad luck, and sending up wishes and prayers of brighter future and making a beginning of new things to come.

Anyway coming back to Goa. After dinner and a happy high round of drinks, I started walking towards the Calangute beach, with a bunch of friends. Since all of us were happily high, a few friends were chirping incessantly, a few were lovey-dovey birds, while @Srinistuff and me lied down on the beach, gazing into the sea waves and twinkling stars above us in the infinite spread of sky. Suddenly, I saw a bunch of sky lanterns, rising up and up in hordes. I was reminded of my wish to set afloat such a lantern and wish for good luck. So, @Srinistuff and I decided to set sail a lantern in the sky. While we able to light the candle, the lantern just refused to soar high in the sky. After two-three unsuccessful attempts, I went into a bout of insanity and tears. Looking at my drunken hysterical condition, our friends came running to help us float the lantern. Before we knew, hoards of men came running and started helping us with to afloat the lantern in the sky!

While I was happy high, I wasn’t drunk enough to realize that a group of strangers came running to help us afloat the lantern. That day, I realized something Paulo Cohelo’s words:

“When you really want something to happen, the whole universe conspires in helping you achieve it.”

It was a graceful reminder, that the world doesn’t look all bad. That day, the entire beach of Goa stood behind my prayers!