A bike adventure in Ladakh

Ok, fine! May be I am exaggerating a bit. But my dream travels to Ladakh will be always overshadowed by what had then just happened. Nothing could have prepared us for it….

It had been raining the whole day, while we rode our way out of Leh, on our Royal Enfield through the stark, imposing brown mountains. Since the region is situated in a rain shadow area, we had on purpose ditched any rain coats or rain cheaters for our bulky winter coats. As our bike rode through one curve after the other, the skies grew somber, with puffy clouds that were just ready to burst. I tend to be quite a cry baby at times and therefore @Srinistuff decided to take a quick break.We decided to wait it out till the clouds drained out as we sat by, next to a chatty government delegation on the roadside café.  By the time we finished our Ladakh ginger lemon tea, the clouds had withdrawn from their war over the sun and the golden rays cut through the skies, shining bright. Soon we were on our way, having decided to make up for our lost time and visit Alichi, before we reached Lamayaru by sunset time. But god had other plans….. 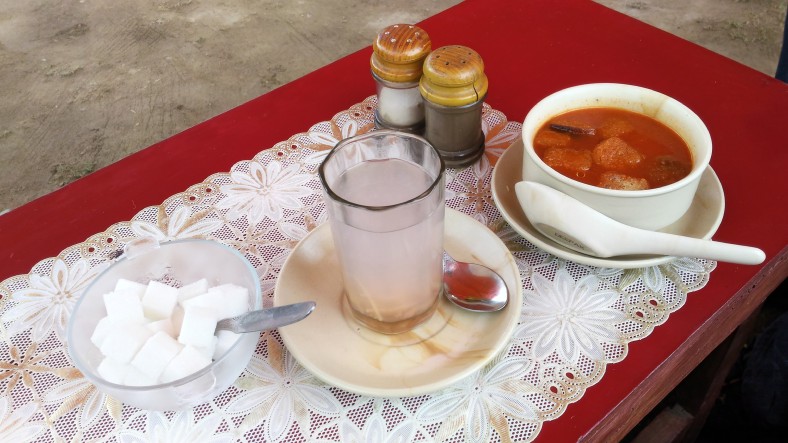 On the way,stop by for some hot lemon ginger tea or tomato soup

Lamayaru is roughly about 80 KM from Leh and we had to cross scenic yet risky roads through villages of Phey, Nimoo, Basgo, Alichi, Saspul, Uleytokpo, Khaltse and Nurla, with only the blue Indus to our company. Though the roads are excellent to drive on, with little patches of stones strewn in and @Srinistuff having rode in the Himalayas before as well, it was both a testing time for me (I have never been a good Pillion rider) and @Srinistuff (obviously just pressurized by my presence, off course he loves me too much to throw me rolling down from a mountain 🙂 ).

And then the inevitable happened. We passed a military hospital just before Khalste, having taken a brief break to take a few pictures and soak in the absurd enormity of the naked mountains that stood before us. A little curve ahead, a narrow passage and with a truck coming at us from the other direction, @Srinstuff decided it would be wise to go slow or wait for the truck to pass by. As our Enfield slowed down, we lost our balance and Srini went rolling to the other side. By then having realized that we had just had an accident, I jumped off the bike with one leg out. With a fear stricken mind, that perhaps, Srini was about rolling down the in the valley, I hadn’t realized that my other leg was still on the bike! By the time, I realized that Srini hadn’t fallen off very far from me and run immediately to secure me, the bulky bike fell on my leg, peeling off a large chunk of my leg, leaving a big part of my skin flesh exposed. It was cut red, swollen and inflamed. Fortunately, there was a government official in a Xylo behind us and realizing what had just happened, he came running to help us.

By then, it was quite evident, that we wouldn’t make it to Lamayaru, today. We immediately rushed to the military hospital we had passed by. It was a Sunday, so the doctors weren’t around on campus. The on-ground staff, comprising of a ward-boy and two sisters however, immediately attended to both Srini and I. The ward boy cleaned my wound and helped dress my leg. Reeling under the shock of what had just happened, realization dawned on me and I started shivering. Tears rolled down from my cheeks as Srini emerged in my dressing room and I just wept like a baby. I shuddered at the thought of the moment, when we fell, thinking that I had almost lost him to the mountains. It was only at night, that the realization hit me that we weren’t really driving close to the valley and therefore Srini had always been safe.

Surprise discoveries: Khaltse is a village, where barley is widely cultivated…

Back at the hospital gate, the stranger government official and his driver still were still waiting for us. They insisted that we rest the night in Khaltse, in their guest house and leave for Lamayaru only in the morning. At the guest house, we were greeted by a local Ladakhi aunty, who in turn insisted that I drink some hot tea that she would make for me, so that I would feel better. Falling to her charm and stories of survival of her family through the harsh Ladakhi winters, night befell on us and it was time for some hot local dinner.

That night, after dinner, we decided to stretch our legs a bit, so that my wound and pain would settle down. As we walked towards our room, only silence stood between us. On the road, we could see half sleep, half snoopy little shops, ready to shut down and embrace the night. As we reached a spot, where an India Post red box hung down, I read a little notice which said “India Post Office at 9800.” I looked at Srini, held his hand tight and we both looked upwards towards the sky in what looked as a little thank you offering to the Himalayan gods. And as we did that, the mountains looked bathed in moon milk light and an infinite expanse of clear black sky, with a million dazzling studs. Somewhere a milky galaxy emerged and I realized- I had never seen such a clear star studded sky back in the city and the chances of having seen it were next to none, if we didn’t have our ‘Death by the Ladakh mountains, well almost….!” experience that day…… 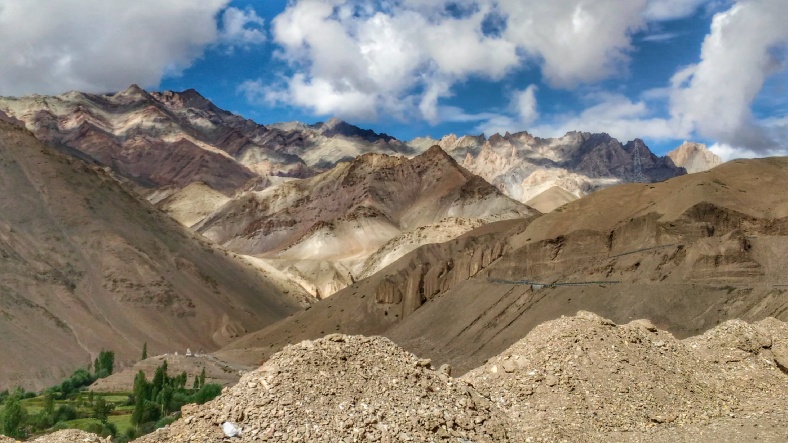 And then we made it……

Tips for a bike adventure in Ladakh, in case you are still, just dreamy eyed fools like us:

Have you experienced rode the high passes of Himalayas yet? If yes, tell me about your experiences in comments. If not, then let me know, if you would go on one soon?

Read about my Himalayan Experiences here:

My first tryst with Himalayas

In Pictures: A pillion in Himalayas

7 thoughts on “Death by the mountains of Ladakh… well almost!”