12th May 2007, Saturday’s calm and quiet night, while preparing to sleep, I heard a sudden thud on my door. Confused and reluctant, when I opened the door, I was glittered by sudden surprise visit of my cousins my next immediate family and my grandparents. After welcoming the guests, as decided all the children and little ones were put to sleep under the excuse of tiresome journey. Soon we all were fast asleep-having no idea of what was in store for us-next!! Everything as usual went on in the morning. The sun had risen. Slowly, birds had started coming out of their nests. Life on the earth paved way for new hopes, joys and a lesson we had to learn….. As slowly, kids started waking up, we realized there was a great pandemonium in the house everywhere. All clothes were scattered, food items being packed all suitcases and bags packed, watterbottles and huge hush-hush of elders! No idea of what is going on…… Then all of a sudden, there was a huge hullah bullah…..singing ‘Happy Birthday’. All of a sudden tube light lit in my mind…It was my cousin’s birthday and her gift was a long family tour. Being the eldest sibling, I took the honour of telling those bunch of restless kids, not knowing what was happening that we were on our way to Khajurao-the enigmatic temple town. As we sat in ‘Varnasi Express’ we were all filled with bundles of joy. However, being a teenager I was a bit wary – why were we going to Khajurao…? Why?? As I had some idea of what temples in khajurao were, I was little embarrassed of visiting it with my family and especially my siblings. Till now my mother had known my feelings and then assured me that it was a trip of which I won’t regret. 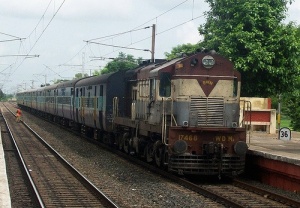 Two days later, we arrived at Varnasi. From there we boarded Jet airways and arrived at Khajurao. We stepped in hotel ‘Sun-set view’ and after our dinner at around 2:00p.m (thanks to our 8 hours late train and then half hour late flight….). It was decided that we will be visiting the temples early next morning. At around 6a.m in the next morning we left our hotel rooms. We learnt that Khajurao are basically divided in 4 zones namely southern, western, eastern and northern. The name ‘khajurao’ came from the word ‘khajur’ which means date palm trees. It is said that due to the wide existence of date palms in ancient days, it is named so. However, it is quite incredible to see that today, not a single date palm can be found.

Forgotten and unvisited until mid 1960’s the place is now after the ‘Taj-India’s single biggest tourist attraction.’ Declared a World Heritage Site in 1986 in order to preserve its splendor for posterity, Khajuraho is a prominent, must-see destination on most tourist itineraries. The temples of Khajuraho are India’s unique gift to the world, representing, an ode to life, to love, to joy; perfect in execution and sublime in expression. Life, in every form and mood, has been captured in stone, testifying not only to the craftsman’s artistry but also to the extraordinary breadth of vision of the Chandela Rajputs under whose rule the temples were conceived and constructed. It has the largest group of medieval temples, each studded with countless erotic sculptures of extra-ordinary grace and delicacy. The temples were built in a span of hundred years from 950-1050 AD in a truly inspired burst of creativity. 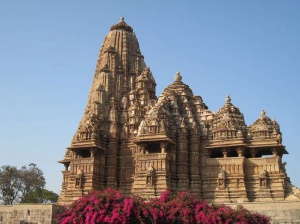 The whole area was enclosed by a wall with 8 gates, each flanked by two golden palm trees. The guide who had accompanied us informed that according to the scripture books of Hindu mythology, the idea behind inscription of erotic images on the temple walls was to save them from ‘Thunder-lightening.’ According to the thinking that divine lightening ‘Yamini’ which is a virgin, due to the shamefulness of erotics it did never try to damage these temples. But the ancient absolete does not confess it, and hence they have affixed lightening protector. The story goes like lord Moon had promised his beloved hemvati that their son Chandraverman ‘the unconquerable’ would build divine and great temples, thereby immortalizing their love. When he was established as a ruler, he had a dream-visitation from his mother. It is said that she implored him to build temples that would reveal human passions, and in doing so bring about a realization of the emptiness of human desire. As we went on ahead on foot walk I realized that out of 85 temples built by chandela dynasty race now only 25 temples remain. Others lie in ruins or are still waiting to be excavated. As we wait to find out the mystery, we find that alongside with the erotics the temples have portrayed female beauty upholding her divinity.   As we moved ahead we realized that the temples not only carry erotic sculptures but also we can see but some carvings like a woman removing a thorn from her foot and another woman apply eye make up, or a mother fondling and caressing her child, or a Scorpio on a woman’s lap. The temples depict how in ancient times women always participated in every walk of life of a man. But, that did not mean that women were of a loose character. 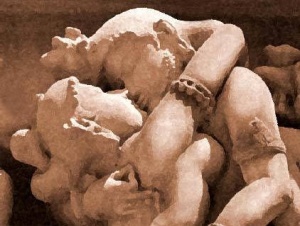 I was appalled to se the narrow mentality of our so called ‘modern society.’ Which has made such a hue and cry over sex education in high schools. However, the ancient temple town of India upholds sex as one of the ways of ‘human emancipation.’ It depicts the theory of ‘Purusharthas’ where ‘Moksha’ should be achieved by performing all our duties of ‘dharma’, ‘artha’, ‘kama’. It says that progeny is necessary to attain ‘Nirvana.’   As we wondered at the enchanting world of khajurao I could see fine dedicated attempt of artists, outcome of the courage f chandelas done with the help of chisel and hammer. Out of the standing temples the major ones include’Dulhadeo’ which has depicted the marriage ceremony of lord shiava to goddess ‘Paravti.’ Goddess Jagdamba temple, too, is worth visiting. It is constructed with embracing posed idols particularly depicting riches of god ‘Kuber’. Yam (The Death) visiting mirror attract to look at them on the walls. There are two lines and over them a small lined statue. Then another one which caught my attention was ‘Chitragupta temple’ dedicated to ‘lord sun’ Who is stabled on the chariot being driven by 7 horses. Towards the right chitragupta who could be seen in broken condition is shown to be having a pen in his hand. He is shown to maintain a character roll of all. The architecture is also of a very unique style. Each structure stands on a high masonry platform with a distinct upward direction to their build, further enhanced by several vertical projections to simulate the effect of an overall lightness. The three main compartments are the entrance (ardhamandapa), assembly hall (mandapa), and the actual sanctum (garbha griha).

Nevertheless, the temples appeared more enigmatic and mysterious as if we reached in some unknown place. My uncle who had accompanied us during the tour started scaring the little ones Announcing that it was indeed my… (sister’s) reincarnation of Hemavti….. On our return to the hotel we visited many near by attractions like-‘Chitakoot’-a hindu pilgrimage, ‘Jeanie palace’,Dhubela museum’, ‘Panna national park(Tiger reserve). Khajurao offers a great deals of bargain shopping at ‘Mrignyayani Emporium’,’Bajpai market’, ‘Plaza market which surround the market from all the sides. Foodies, too, are offered a wide range of eatables from ‘Thai to Chinese’, ‘Mughlai to Japanese’,’Italian to the traditional Indian thalis.’ The guides are available –recognized by the government of India who charge anything between Rs.350/- to Rs.975/-